Founded in Tampere, Finland by Aleister Zetekh (Saturnian Mist) in 2015, King Satan are an Industrial Metal trio who give zero fucks. Their demo release We Are King Satan and We Fuck the World hit the web in December 2015 and consists of three tracks laced with EBM and Extreme Metal influences: “Enter Black Fire,” “Psygnosis” and “Kali Yuga Algorithm.”

Let’s start with “Enter Black Fire.” This song makes me uncomfortable, but in a good way. Let me explain: I don’t dance. I can’t dance. As a rule, if I can’t headbang or do ‘The Bernie’ to the music I’m listening to, I get uncomfortable, but listening to the “fuck off and raise hell” message in Zetekh’s gritty vocals gave me a Cheshire Cat-style grin on my face. The loop in the background borders on Techno, and mixed with some heavy guitars and Extreme Metal-style vocals the track felt fun, even with the anarchy-esque lyrics. There’s also a trippy music video which can be found on YouTube, but I wouldn’t watch it at home alone late at night.

“Psygnosis” is definitely my favorite of the three. It’s the fastest and features a fun higher-pitched digital embellishment. The creepy voice of “Dr. Woland” (a character within the track) gives the song a manic characteristic and demonstrates the impressive vocal spectrum he is capable of.

“Kali Yuga Algorithm” is consistent with the first two tracks. It can be pretty well summed up as a solid Industrial track, with a 38–second keyboard intro that leaves you wondering what direction the rest of the track will go in—stomp dancers rejoice!

This release is a strong demo that’s consistent in its sound, creativity, and the overall fun feeling I get when listening, and I look forward to a full album with some more variety. It didn’t convert me to Industrial but I could definitely see myself doing way too many shots in a dark club with unnecessary amounts of strobe lights in it with these tracks blasting in the background.

If you’re an Industrial fan or just feel like having a sweet dance party without giving up Metal for a day, check them out on Facebook, at www.kingsatan.net, or via SoundCloud where all three tracks are available for streaming. Also get ready to catch them live as they recently finalized a live lineup to take the show on the road. 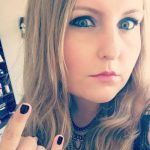