California rockers have been around since 1993 and since then have achieved phenomenal success and secured themselves as one of the most consistent and hard hitting rock acts going, never letting up and constantly preserving their roots, whilst evolving, and gaining support from old school fans and new alike. Now two years after their previous album ‘F.E.A.R’ they are back with their most experimental release yet with ninth album ‘Crooked Teeth’.

Opening track ‘Break The Fall’ has a dramatic and sorrowful intro, that builds up before an effective rap section comes in, accompanied by electronic synths, then it gets into full swing rock Papa Roach style, with a large sound, especially through the use of gang vocals, and an even bigger chorus, which is exceptionally melodic. The whole song is all very emotively charged, with manic rapping and honest vocals from Jacoby Shaddix. This is the perfect transition track, revisiting their rap-rock roots from their nu-metal ‘Infest’ days but also embracing a more modern edge, largely aided by the electronic synths used.

The title track and first single ‘Crooked Teeth’ keeps the power going. This is highly sonic, with large bouncy hooks, all delivered with a sense of urgency, giving it a forcible sound, as you would expect from the lead single. This is sure to be added to the fan favourites amongst their immense back catalogue.

Ambient ‘My Medication’ asserts the opening tracks further and keeps things coherent, again demonstrating their heavy rap past, but shows something different also. Featuring stripped back powerful vocals, but vicious rap-rock vocals later throughout, along with, vast riffs and strong gang vocals, to help take it to the next anthemic level, something this album has many of.

As we reach ‘Born For Greatness’, we enter the half of the album where things get more experimental and diverse. This shows them at their most mainstream and most daring if you will.  It has their signature larger than life sound, and is explosively catchy, but it may not be to everyone’s liking, as it is more pop-driven than we have previously seen from them and a departure from their sound.

Carrying on their adventurous turn is ‘Periscope’ which features American singer-songwriter, Skylar Grey. This has a slow ballad feel and shows yet another layer to their exploration. Skylar’s vocals are effective and complimentary with Jacoby’s, making this a sweet and beautiful offering.

Latest single ‘Help’ goes back to the tone of earlier tracks, being infectious and emotive with lyrics such as “I think I need help, I’m drowning in myself” and is a very strong and memorable single, aided by heavy riffs and strong synths.

Another guest appearance later comes from American rapper Machine Gun Kelly. The moving and honest vocals from Jacoby give it an extra edge, and Machine Gun Kelly’s rapping parts are well used and balanced against Jacoby’s vocals. Final song “None Of The Above” goes out in classic Papa Roach style, being insanely melodic, dynamic and commanding. This was a wise one to end on which is the right balance between old and new.

‘Crooked Teeth’ largely hints at the ‘Infest’ rap rock era but embraces the more modern side, which is the epitome of this new album. There are some unexpected twists and turns thrown in along the way, with the band showing that after all this time, they aren’t out of new ideas and afraid to experiment, even dabbling in the more alternative or pop side of things. Some of these new sounds explored may not suit everyone, but nonetheless whatever the band put their minds to, they pull it off well and can’t be knocked for trying to mix things up further. This certainly bridges the gap between the old Papa Roach roots and something new and for that it should appease existing fans, as well as draw in some new ones. 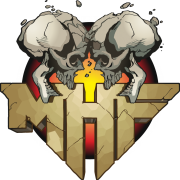